On Tuesday, 2 October 2018, the COST Action MOBILISE – Mobilising Data, Policies and Experts in Scientific Collections – kicked off with its first Management Committee Meeting in Brussels, BE. During the meeting, led by COST Science Officer Mafalda Quintas with the support of COST Administrative Officer Tania Gonzxález Ovin, the Action was presented in detail, the working groups were organised and the leading roles were determined. Dimtiris Koureas (Netherlands) and Ana Casino (Belgium) were voted in as Chair and Co-Chair of the action. Furthermore, Karol Marhold (Slovakia) was elected as coordinator for the Short Term Scientific Missions and Christos Arvanitidis (Greece) for Communications. 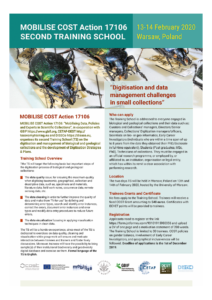